Hell is Other People

Hell is Other People is a webtoon by Kim Yongki.

Jongu Yun is a young man in his 20s who moves to Seoul and rents a cheap room in a run-down building because he is low on money. The place is dilapidated and the residents are creepy, but Jongu decides to stay until he has enough money to move elsewhere. However, when mysterious events occur, Jongu realizes that the residents may be more suspicious than they seemed.

Living in an apartment where everything is unfamiliar. There are those who're suspicious.

This work's title, 'Hell is Other People' refers to "L'enfer, c'est les autres" (Hell is other people) in Jean-Paul Sartre from No Exit. 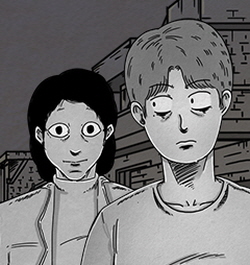