Westwood Vibrato is a Naver webtoon written by Youn Inwan and art by Kim Sunhee.

There's a story behind every song and every instrument that plays them. Heart-warming dramas unfold at this musical instrument repair shop in South Africa.

Cornelia is a world renowned South African wind instrument repairer and people from all over the world come to seek her help in repairing their instruments. Each of them come with their own emotional backstory and Cornelia works with them to heal old wounds and lay the past to rest through music. 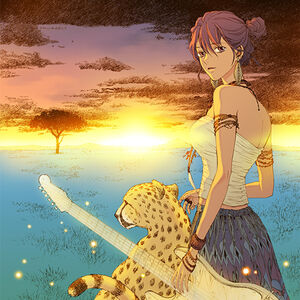 This story was released in Japan, in black and white (and some full color pages) in Monthly Sunday Gene-X. After some time it started to also be released in South Korea in Naver Webtoon, as a webcomic in full color. The chapters are pretty much the same, there's a few differences like: the extras in the Japanese version are in the end of each chapter, in the Korean version it's in a special chapter; also almost all the images are flipped horizontally.

It belongs to a universe called the Super String.

Private
Blade of the Phantom Master

This is the timeline.