Your Smile is a Trap

Your Smile is a Trap' is a webtoon by Aengo.

Ex-idol trainee Kiyu has lived his whole life adored by everyone for his good looks. But he dreams of ordinary high school life, so when he puts on glasses to blend in with his peers, he finds that making friends is a lot harder when you don’t have your looks to fall back on. Not to mention he’s also socially awkward, his new seatmate has a permanent scowl on her face, and his fans have tracked him down at his new school. 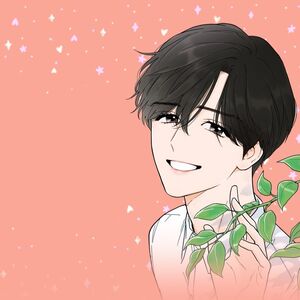 Kiyu is an ex-idol trainee who returns home to live with his grandma despite his mother wanting him to continue his work as an idol. He wants to live a normal life without all the craziness of being an idol. He go to school wearing glasses that cover up his good looks. At school, he meets the girl who sits next to him, Lily, who has a permanent scowl on her face. The first day of school, everyone thinks Lily is bullying Kiyu and made him her errand boy because Lily is known as a bully at their school even though she has never bullied anyone. Later, Kiyu discovers Lily is his next door neighbor and the daughter of a very scary man he meets who he warms up to after finding out he is quite nice and is the man who was making his delicious lunch everyday. He finds out that their family is actually very nice and Lily's dad is a very kind and sensitive man but the only thing is that their facial structure is different so they look very scary, intimidating, and mad all the time when they aren't like that at all. Because of this, they were very outcasted by their neighbors when they first moved in but Kiyu's grandma was very kind to them and because of this Lily and Kiyu's grandma were close. However, Lily does not realize Kiyu from her class is Mrs. Ahn's grandson because he does not wear his glasses at home, therefore there is a major difference in his looks. At school, people still think Kiyu is Lily's errand boy but two girls look at a music video and realize that Kiyu looks exactly like the guy in the video except for the fact that Kiyu has black hair and the young man in the video has white hair. As a result of this, a rumor goes around school that Kiyu was an ex-idol and many people start trying to get close to him, especially those two girls. Kiyu is very overwhelmed every one trying to know him all of a sudden and denies all the rumors. He asks the girls to stop the rumor and everyone starts saying things like "I heard he got kicked out." "He's nothing special." "He's too ugly anyways." but Kiyu is okay with those rumors instead of people crowding him. One day, Kiyu comes to Lily's dad's shop in his uniform without his glasses on and Lily realizes that he goes to her school. She soon figures out that Kiyu is the boy who sits next to her.